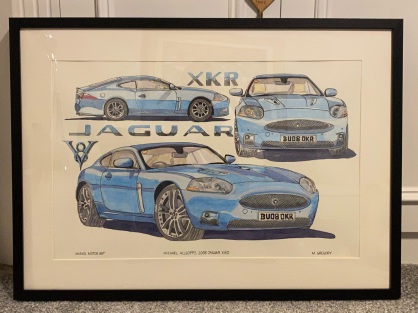 Just finished this painting of a 2008 Jaguar XK-R. Finished in watercolour and measuring 24" x  20". 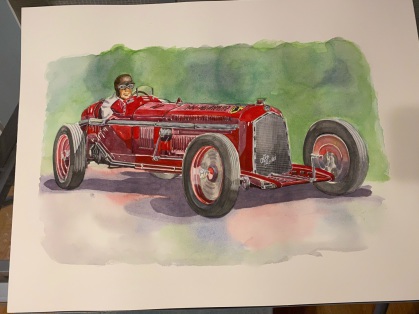 The Alfa Romeo P3 a classic Grand Prix car designed by Vittorio Jano. The P3 was first a 1930’s single-seater Grand Prix racing car and was based on the earlier successful Alfa Romeo P2. The painting was done in watercolour and measures 24” x 20” in size.

Finished this art commission. The owner wanted a picture of his previously owned Triumph GT6 Mk1 with infamous Wolfrace wheels  and his much newer Jaguar XK8. Placed in a 12” x 10” mount it was finished in pen and watercolour. 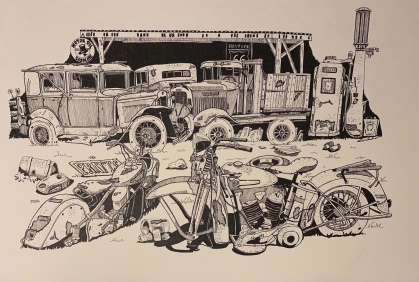 Just completed this drawing project. I enjoy watching a TV series called “American Pickers” and this is my adaptation of what they sometimes come across in the programme at barns right across the USA. This was done in drawing pen and will be 20” x 16” when mounted and framed. 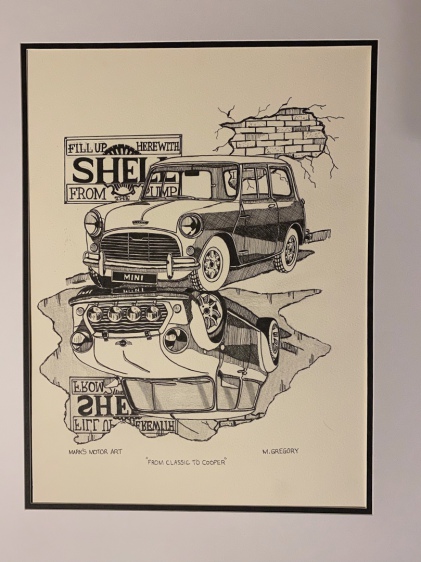 "From Classic to Cooper"

Something a little different this time.

This project was entitled “From Classic to Cooper”.

The reasoning behind it is if you turn the picture 180 degrees the top mini goes from being an original classic mini to a later Mini Cooper in its reflection, something a little different.

One of my pictures just completed is a 1931 Austin Swallow done in watercolour with a simple pen drawing background of Polperro in Cornwall.

Another art piece I’ve just finished is this period image of a 1932 Oldsmobile and a Harley Davidson with its Cycletow conversion kit. Initially drawn in pencil, i then went over the pencil with more precise lines with a drawing pen (size 3). Once all pencil lines were erased then varying layers of watercolours were added. Painting was done on Acquarello watercolour paper 300 g/m (140 lbs) and is 18" x 24" in size. This is quite an in-depth and detailed picture but it's just the era I love doing. Now just needs mounting and framing to finish.

I am proud to say that i have now been added to the following Motoring Artists website which was originally launched back in January 2008 to list many interesting artists and enthusiasts.

The 'Artists Listing' is a database of motoring artists and their work which has been built up over the last twenty five years. You can now see my personal page on their website at ...

or simply look me up under their Artist listings under "G".

Don't forget you can also find me on the Automotive Artists website on AutomotiveArtists.com at https://www.automotiveartists.com/mark-gregory/

These two commissions were recently completed and have now been despatched to their new owners. One is a modern day Jaguar XKR, the other a Fiat Abarth 124 Spider. 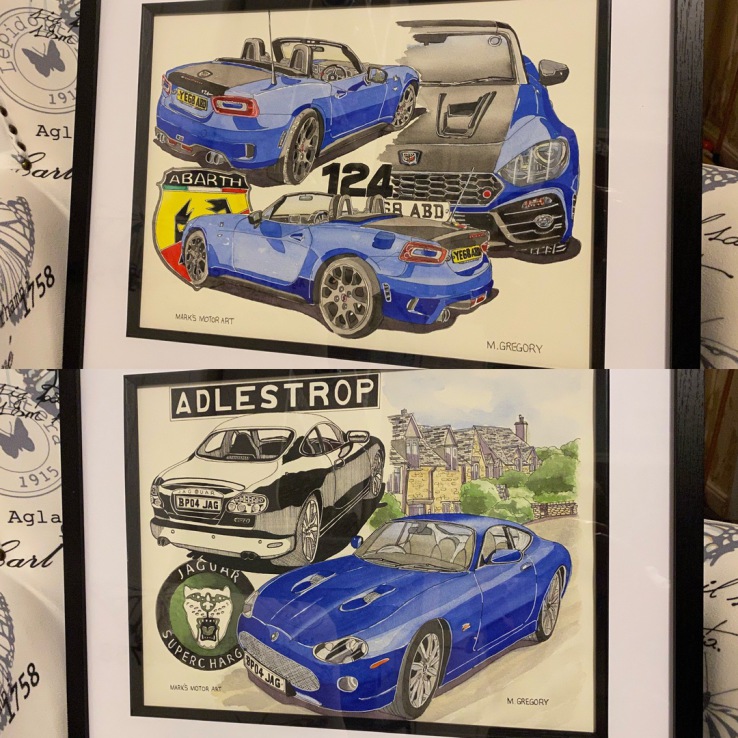 This commission was done for Mr David Spillane. One image is of his beloved 2010 Jaguar X150 and the other was for his love of Scooters.  He asked if his wife could be included in the Jaguar painting so of course I obliged. 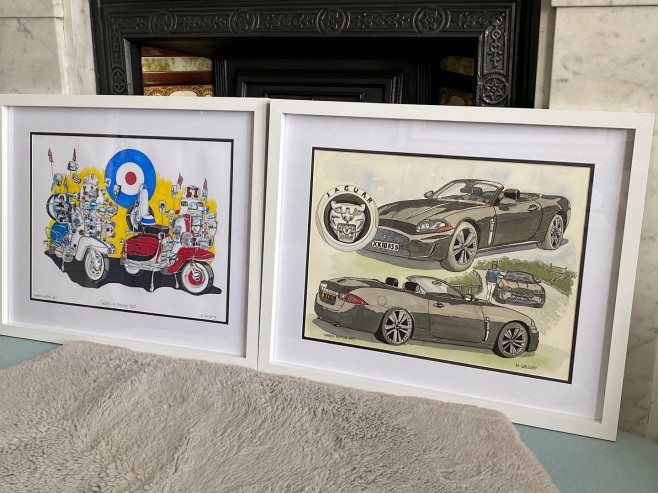 I was asked to paint a commission of a friend's 1936 Wolseley Hornet race/road Special.
First introduced in 1932 the two seater Hornet Special fuelled the public's infatuation with speed and the open road during a decade when motoring boomed.

The owner of this beautiful example wanted an artwork commission completed in watercolour of his beloved sporting roadster and left it up to me to place the car in a suitable background.

I discovered that the owner had previously raced the car up the Prescott Hill Climb so I researched the venue and found a good shot of the venue start line which I thought would be just fine.

The owner then kindly sent me across these two initial images to use as photographic material. 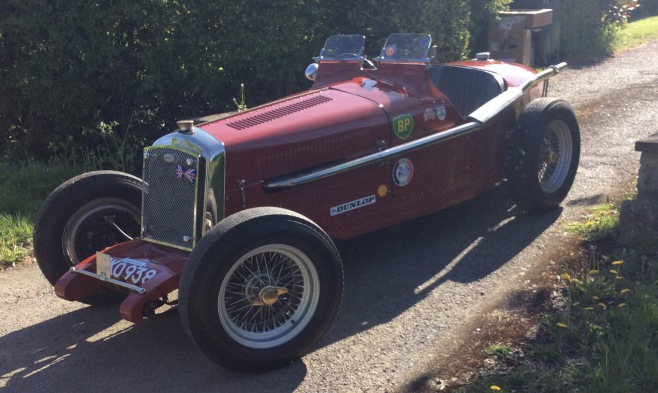 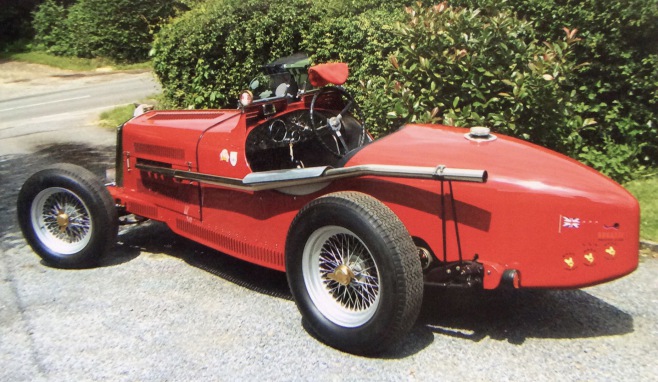 I then went on-line and found the picture below of the chosen background venue and used it as a guide for the background material... 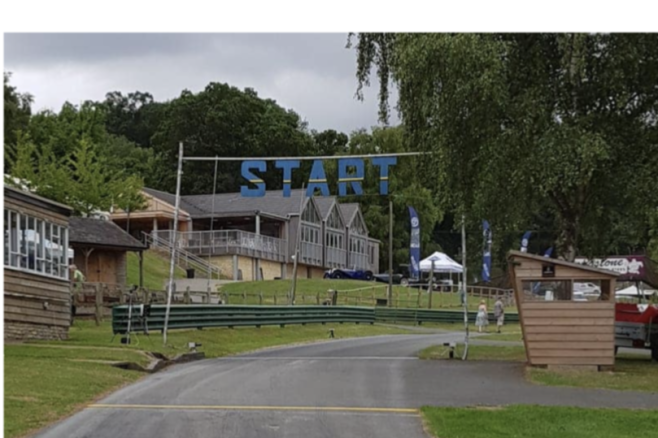 I then, with a bit of artistic licence, began the process of drawing the car initially in pencil, followed by fine art pen, before the final washes of watercolour and shading were added. Some characters were then added to aid the final scene before the picture was then mounted and framed in colours that I thought did the picture justice. 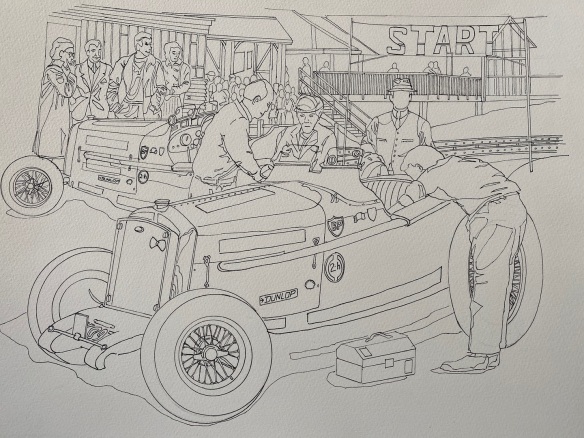 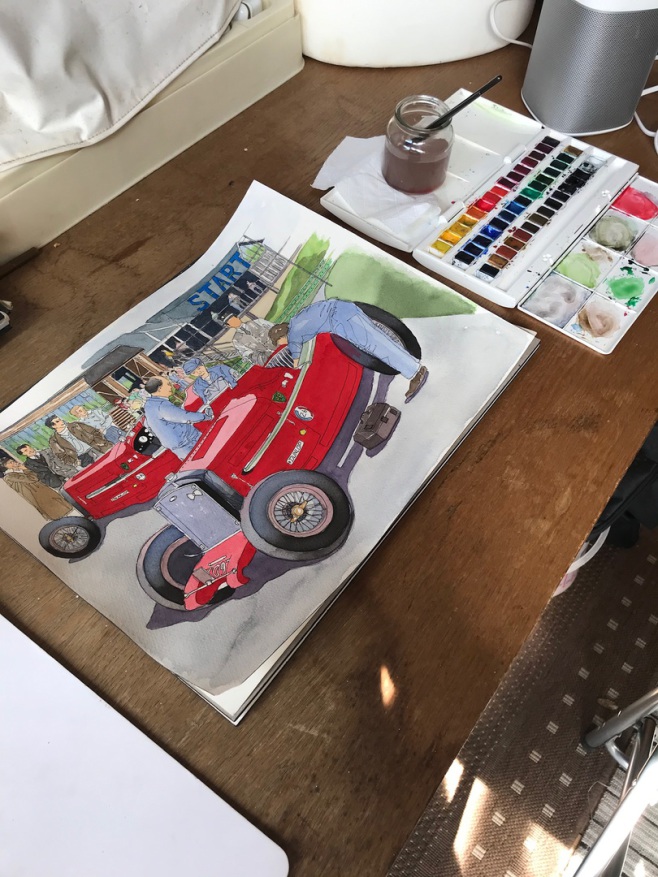 The painting has now been presented to its new owner who has kindly taken these superb images of the final artwork against the car itself, and what a great shot it makes too - thank you Tony. 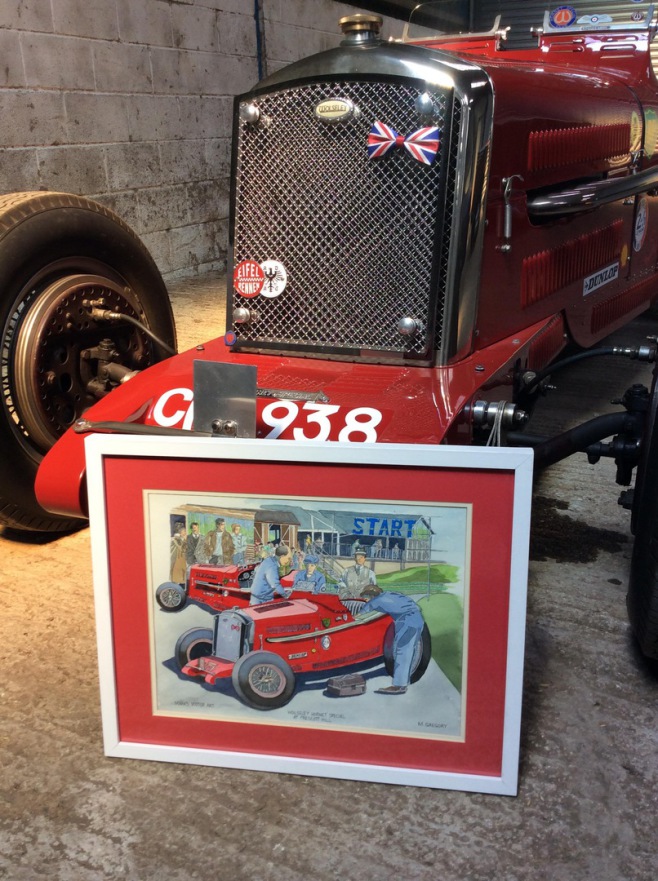 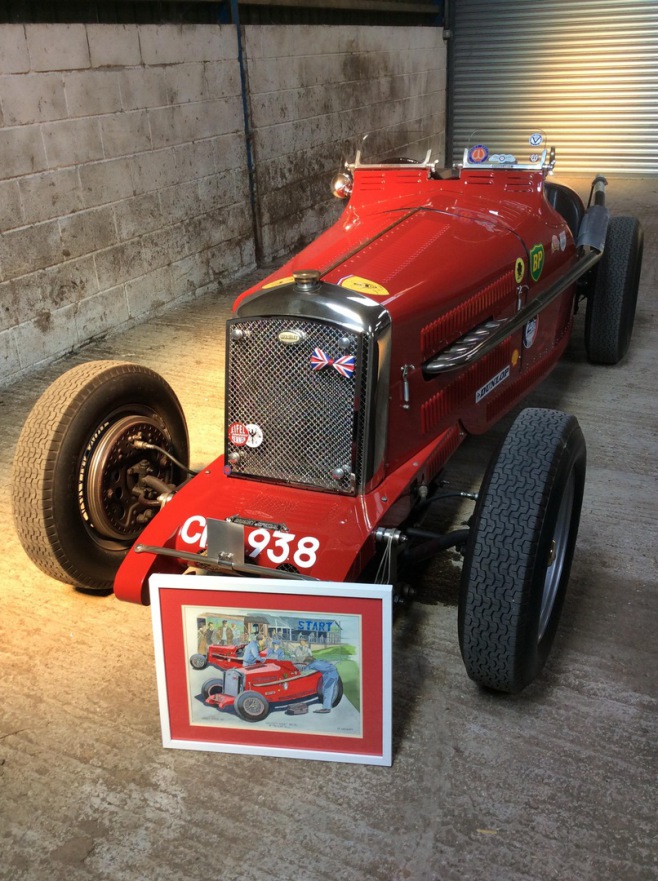 Here are some of my Jaguar commissions done during May 2020 for club members of the Jaguar XKEC and F-TypeEC. 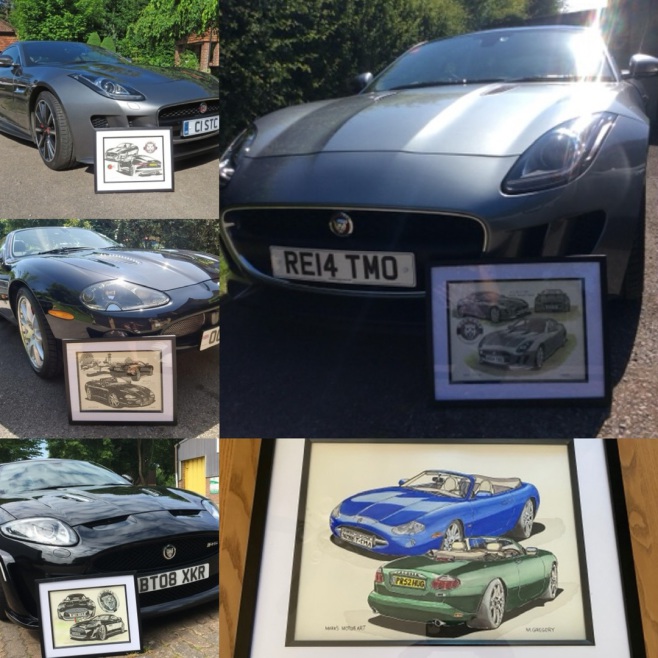 Here are some of my pen drawings depicting modern day hot rods and vintage Bentleys from the 1920s. All are 16" x 12" in size and took many man hours of shading and completion. 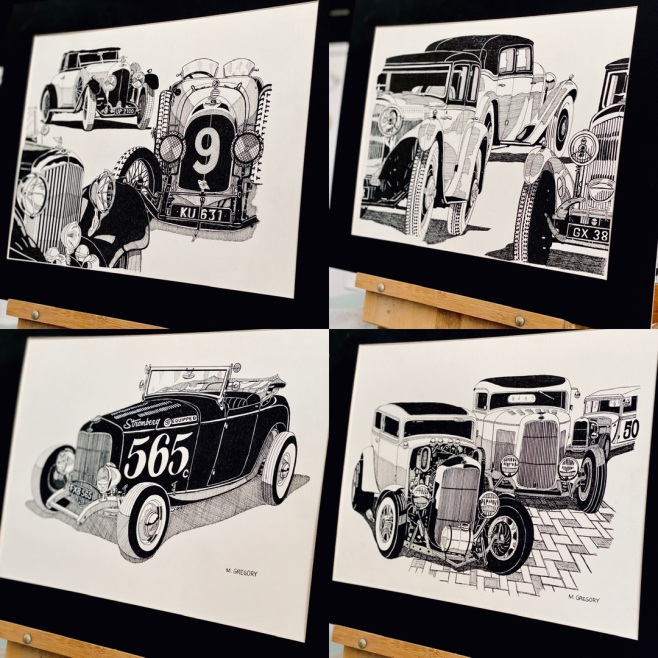 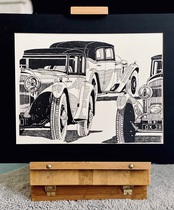 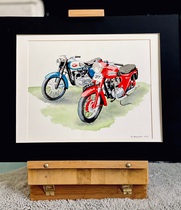 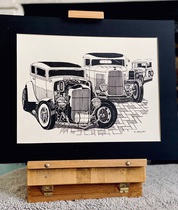 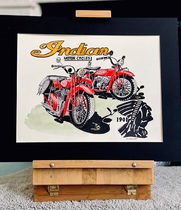 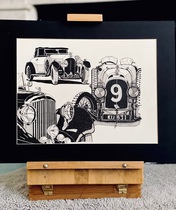 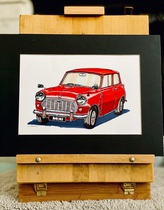 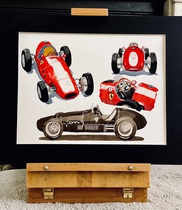